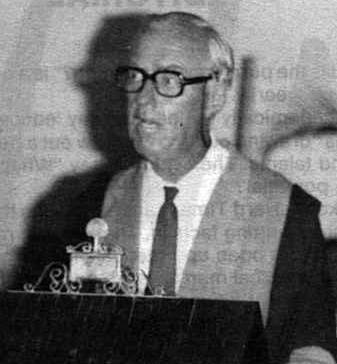 I have one last pleasurable task to perform on your behalf but before asking Mike Whiley to come forward and accept the Society's token of appreciation for all his hard work at and for Plumtree over the past nine years I must mention that this Term sees an end of an epoch in Education in Rhodesia and Zimbabwe. It brings down the curtain on the teaching career of one of the Ministry's longest serving members. Mike Whiley left Plumtree School at the end of 1949 and proceeded to the University of Cape Town where he received his Teaching Degree - he then went on to Oxford to complete his Diploma of Education. He witnessed, while there, Dr Rodger Bannister's incredible feat of sub-four-minute mile.

Mike came back to Rhodesia in the mid 50's and was posted to Umtali Boys High School where he renewed his association with the doyens of Education as far as we are concerned - Coney Fleming and Jim Clarke His career until 1984 spanned a posting to Ministry Head Office and teaching spells at numerous schools - among which were Allan Wilson, Lord Malvern and ultimately Headmaster Ellis Robins Boys High. The latter school achieved its finest hour with Whiley at the helm.

Mike was not just content to be totally immersed in his vocation he was also moved to great heights in service to Sport and People.

His first love is Cricket but the pinnacle of his sporting career was possibly being a licensed Currie Cup Rugby Referee - Spike was frequently seen controlling first class games at venues throughout Rhodesia and was on the field of play in the glorious days of Rhodesia rugby in the early to mid-70's.

In the civic sense he rose to Presidency of the Harare Rotary Club and since being at Plumtree has been an Honorary Rotarian with my Club Bulawayo South, and has been responsible for controlling the Rotary Interact Club at Plumtree.

Mike Whiley of Pioneer Stock in Rhodesia leaves Plumtree School for the second time in April 1993 - 44 years on.

He came to us in Jim Clarke's place at his own instigation in 1984 having personally negotiated the Plumtree Headship with the then Minister of Education Dzingai Mutumbuka. It was the vogue in Education in 1984 for persons appointed to headships to resign shortly afterwards and emigrate. Mike had set his sights on Plumtree and guaranteed to the Minister that if he gave him Plumtree - he Mike, would give Education another six years of service - he has given nine !

Mike has many friends and possibly many enemies - you cannot achieve what Mike has achieved in his single-minded determined manner without standing on people's toes. But we are unlikely to see his brand of administration in Education again either here or in Zimbabwe.

When things went wrong Mike was not one to take a back seat - we are all familiar with his technique of spraying correspondence at newspaper editors and Officialdom when he has sought to 'tell them the facts', put the record straight etc. Mike would be hard-hitting in this mood and never failed !

Mike, our gift goes with you from Plumtree to Harare as a memento of the Society's affection and appreciation for what you have achieved 'in this place'.