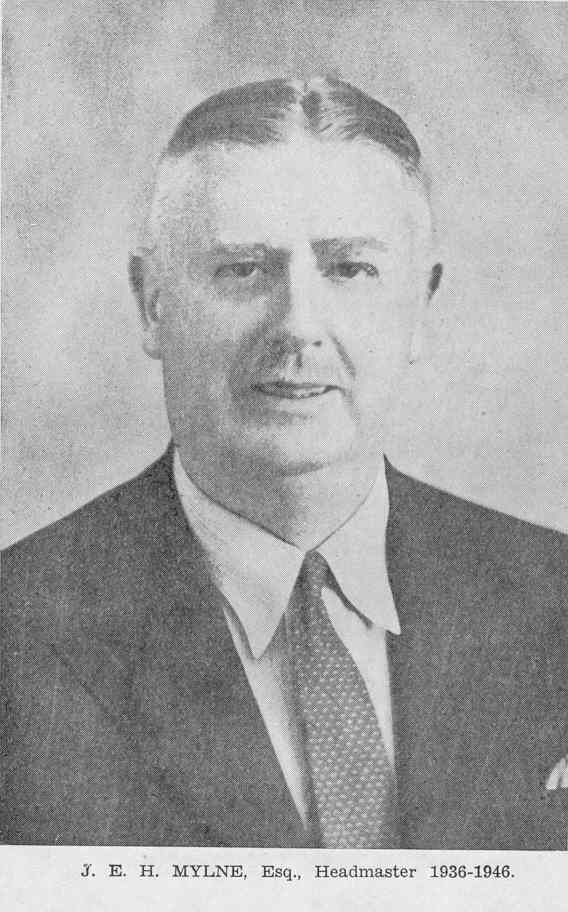 Fitting tributes have already been paid to the great work done by Mr. R. W. Hammond during his thirty years of office in Plumtree. That, great-hearted, public-spirited headmaster not only laid the foundations, well and truly, of the School we all hold in so high regard; under his direction Plumtree grew into a place of learning known and respected throughout South Africa as a great educational centre. Long before he retired a Hammond tradition had been established which made it all the more difficult to find a successor who could carry on the work and develop it yet further, while still maintaining its traditional characteristics and its place in the hearts of Old Boys and the public generally.

Tangible evidence of the fact that Mr. Mylne, who took over the reins in September 1936, has succeeded in this difficult task is abundantly available. During the last ten years the roll has grown from 166 (of whom 156 were boarders) to 290 (276 boarders), an increase of over seventy per  cent, which exceeded within seven years of his retirement Mr. Hammond's ambition for a secondary school of 250 boarders. This expansion in numbers has been accompanied by corresponding developments in other directions. Mr. Mylne's desire has been to establish Plumtree as a truly democratic Institution, representative of the whole European community of the Colony, where scholarship flourishes against a Christian background of interdenominational outlook, and where a proper balance is preserved between intellectualism and athleticism.

The School Chapel, the development of the Upper School and the records inscribed on the School Honours boards, the new gymnasium, the three additional playing fields (especially the six-acre field levelled and completed during 1940-1943, grass cricket pitches, and the laying out and beautifying of the School grounds, all bear witness to the Head's determination to provide for the many-sided development of body, mind and soul of those committed to his care. The increase in numbers has, of course, necessitated the erection of new buildings, among which may be  mentioned the gymnasium (1937), renovations and reconstruction of Milner House (1938), Native Compound (1938) , additions to the School Hospital (1940 and 1946), the School Chapel and Gaul House (both In 1941), and five staff houses. In addition, the Beit Hall has been panelled and a projection room (with a second projector) has been built; the old Chapel has been converted into classrooms; the kitchen has been equipped with Esse stoves; and, following the demolition of the old Village School, a new entrance to the School has been made. It is hoped that this latter may in due course be provided with a suitable gateway; this might, perhaps, be undertaken as a memorial to those gallant sons of Plumtree who made the supreme sacrifice during the Second World War.

On the intellectual side the most noteworthy achievement has been the development, already referred to above, of the Upper School, or post-certificate classes, which now number forty pupils. It is from this section of the School in particular that the enhancement of the School's tradition for scholarship and leadership may be confidently looked for. Already there is a long list of Higher School Certificate results which presage well for the future, while the record of bursaries and scholarships won (including three Rhodes Scholarships in 1938, the last year in which they were awarded), is an imposing one.

One special development calls for comment. Until 1938 Afrikaans had not been included in the School curriculum, and French was the only modern language offered. Since that year both languages have been provided, and the fact that seventy-five per cent of the pupils now elect to take Afrikaans is indicative of the wisdom of Mr. Mylne's policy in this matter.

On the lighter side, mention must be made of the continued development of the School's reputation for dramatic productions. Ten Gilbert and Sullivan operas have been produced by the School, and ten plays by the School Dramatic Society during Mr. Mylne's tenure of office. The plays have been presented to Bulawayo audiences as well as in Plumtree itself.

In spite, therefore, of the fact that six years out of the ten during which Mr. Mylne has served as Head in Plumtree have been years of world war, with severely restricted opportunities for development, it can be said with confidence that the past decade has added much lustre to an already illustrious School, while at the same time preserving the old Plumtree tradition. This tradition calls for keenness in work and play, not only for the benefit of the individual but for the good of the community as a whole, whether within or outside the School, and extending far beyond mere schooldays. The recent War has shown that Prunitians still retain their capacity for leadership and disciplined activity, gained through the exercise of self-control and authority during their school-days. 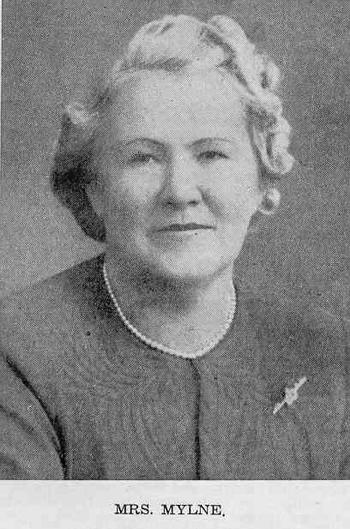 For this and for much more, Rhodesia has every reason to be grateful to Mr. Mylne for the faithfulness, the vigour, and the vision with which he has carried out the task entrusted to him. To Mrs. Mylne also a special tribute is due for the wonderful work she has done in beautifying the School grounds. To both of them in their retirement we wish Godspeed, with that peace which comes from the realisation of duty well done, and with continuing opportunities through the years ahead for those forms of service for which their talents specially fit them to the community in which they live. Of each of them it may be said, as of the great Christopher Wren: Si monumentum requieris, circumspice.  H.D.S.